How to Edit Video Game Screenshots Without Photoshop

Home > How to Edit Video Game Screenshots Without Photoshop

Video game photography has become a full-fledged art form in recent years thanks in no small part to in-game tools like Photo Mode. But while these tools allow you to grab fantastic screenshots of your favorite games, a lot of the time the images still need a bit of editing afterward. The most common way of editing images is of course Adobe Photoshop, however, the software is quite expensive for the average user. If you don’t want to spend loads of money on software that you’re only going to use on occasion, we recommend a better and cheaper alternative in the form of Vance AI.

Vance AI is a great website that hosts a variety of image editing tools powered by artificial intelligence. The tools are very easy to use and there’s no need to download anything because the process takes place entirely online. As an added bonus, you can test the tools for free before signing up for a premium plan. But how exactly can you edit video game screenshots with these tools? Well, that’s exactly what you’re going to find out in this article. Without further ado, let’s take a look at a few concrete examples.

Removing the background of an image using Photoshop can be pretty tricky if you’re not already familiar with how the process works. But why even bother when you can let Vance AI do all the work for you? The Background Remover tool is extremely efficient, as you can see from the screenshot of Control found below. A lot of other automated background removers struggle when there are multiple subjects on the screen, but Vance AI’s tool did a perfect job at isolating protagonist Jesse Faden from everything else in the image. 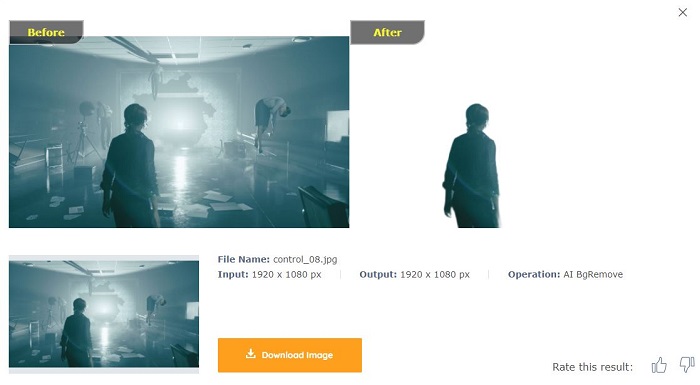 Once you have isolated a character or object, you can easily inject them into a different video game screenshot or even in a real-life image. The AI Background Remover opens up a lot of options and is a great tool for gamers who love using their imagination. Using the Background Remover in conjunction with certain other tools will also allow you to create ensemble images featuring multiple characters from different games. Doing so may require a bit of work but it could result in some pretty cool wallpapers for your desktop or phone.

There’s a lot of focus on 4K these days but not everybody has monitors capable of supporting such high resolutions. As I’m sure you already know, if you have a Full HD monitor, for example, when you grab a video game screenshot in full screen the resulting resolution will always be 1920 x 1080p. You’ll need a bigger monitor if you want a better resolution. Of course, you can enlarge the image with any number of tools but the quality will suffer most of the time. However, that’s not the case when using Vance AI Image Enlarger. 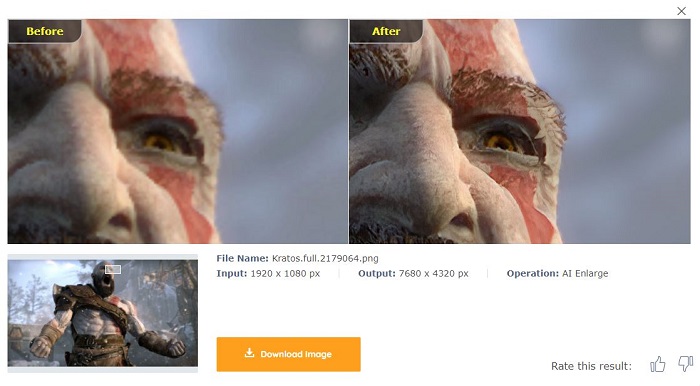 For this example, we used a famous screenshot from God of War (2018) that was originally captured in 1080p. We only had to select the 2x option to upscale it to 3840 x 2160p (4K resolution) but we decided to enlarge it by a factor of 4 just to demonstrate the power of the tool. As you can see, the resulting image is very sharp and detailed, to the point where you can notice certain imperfections on Kratos that are easy to miss when looking at the regular-sized image. Graphics quality aside, it’s safe to say that AI Image Enlarger does exactly what it says on the tin. Just for reference, the image on the left shows how the screenshot would have looked like if it was enlarged using a regular tool.

If you’re looking for an all-in-one solution to make video game screenshots more colorful and vibrant we recommend checking out Vance AI Image Retoucher. This tool is a great choice if you want to brighten up dull images and make the colors really pop up. The results may vary depending on the type of image you’re trying to edit, but as you can see from the screenshot of Horizon Zero Dawn found down below, the effects are definitely very noticeable. 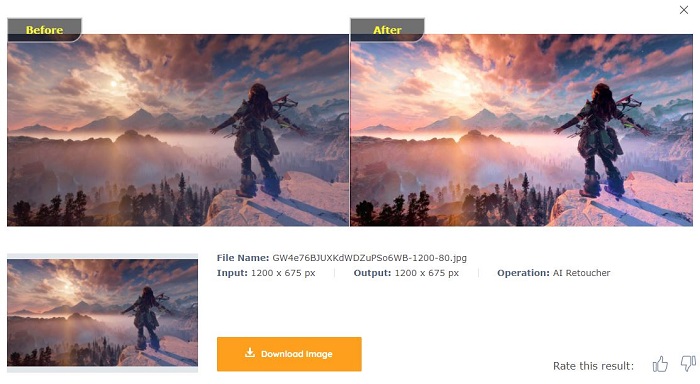 We also tried retouching a screenshot from Dark Souls, among other games, and the tool didn’t make as much of a difference as it did with Horizon Zero Dawn. We think that’s probably because Dark Souls is a very bleak game. You’ll want to use the Image Retoucher for games that already have relatively good lighting and are not too dark.

This is a pretty novel tool that allows you to turn images into cartoon versions of themselves. A lot of video games have stylized graphics and using this tool in those cases won’t lead to any interesting results. Using the image cartoonizer on video games with realistic graphics, on the other hand, is something you should definitely try. Since racing games are some of the most realistic ones out there, we decided to use a screenshot of Forza Horizon 4 for this next example. We think the results speak for themselves. 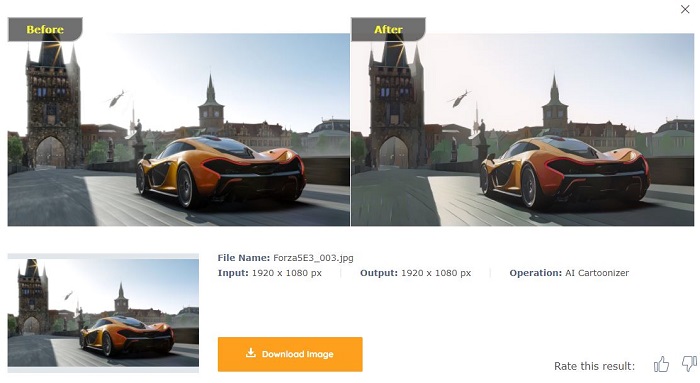 You’ll notice that the tool cartoonized not just the car but everything else around it as well. The road, in particular, looks very interesting as do some of the buildings. The effect on the car itself is actually pretty unassuming at first glance, which creates a nice contrast with the surrounding environment. It’s worth noting that this tool was primarily designed to cartoonize people and works particularly well with human faces. The only reason we used a Forza Horizon 4 screenshot is to demonstrate that the tool works great with pretty much any type of image, as long as the original doesn’t already look cartoony of course.

The last tool we’re going to cover is also pretty unique, though it’s not really meant for editing per se. Instead, this is a sketch converter designed to make portraits look like they were drawn by pencil. Similar to the image cartoonizer, the sketch converter is primarily meant to be used on pictures of human faces and does an excellent job at it. But since we like to experiment with things around here, we figured we should try it on some video game screenshots to see what happens. The results were genuinely mind-blowing, particularly when it comes to Cuphead.

Just in case you’re not familiar with the game, Cuphead was developed to look exactly like old cartoons from the 1930s. The art style is truly incredible and is just so happens that Cuphead screenshots are a perfect fit for the sketch converter. That’s probably because the original already looks like it was hand-drawn, so running it through this Photo to Sketch tool only enhances that effect even further. Of course, the Sketch Converter works great with pretty much any video game screenshot, but we’ve had the most experiment with images of Cuphead for sure.

Editing video game screenshots without Photoshop is actually pretty easy with the right tools. You can always do some basic editing with something like MS Paint but for something a little bit more advanced we wholeheartedly recommend checking out Vance AI. The tools found on the website are quite unique and new ones are added on a regular basis. You can edit up to 5 images per month for free or sign up for a paid plan starting at only $9.90 per month to unlock full access. The company even offers a 14-day money-back guarantee, so don’t hesitate to check out Vance AI. We promise you won’t regret it.